A flywheel is a rotating, heavy disc bolted to one end of the crankshaft of an engine. Its main purpose is to efficiently store rotational energy to prevent the engine from stalling, and to moderate the gaps in power delivery to an engine. The flywheel also provides one of friction surfaces for the clutch, and is often weighted to provide balance to the crankshaft.

Flywheels can be single mass or dual mass.

As the name implies, a single or solid mass flywheel is made out of a single, heavy cast piece of steel or metal, has no moving pieces, and provides a direct contact between the clutch assembly and the engine. These one-piece discs have greater thermal and warp resistance, and can be resurfaced when needed, thereby improving durability. Single mass flywheels are cheaper to buy, and allow for quicker engine revving; they are therefore suitable for frequent engines speed and gear change conditions, such as racing engines or off-road driving.

The main disadvantage of the single mass flywheel is the noise, vibration and harshness of operations.

Dual mass flywheels consist of two flywheels, one attached to the crankshaft and the other to the clutch. The main function of the dual mass flywheel is to store energy from a piston firing pulse and transmit it to the crankshaft so that it rotates smoothly until the next piston pulse, thus reducing noise and vibration. A series of high-strength springs between the two discs act as a ‘mechanical sponge’ to dampen the damaging torsional spikes caused by the engine vibrations and protect the gearbox from the latter. Dual mass flywheels also improve fuel efficiency by allowing for more effective and efficient use of engine power. They are therefore used primarily in larger vehicles, especially those fitted with a diesel engine and a manual transmission; however, they can also be found in certain petrol cars as well.

Despite the functional advantages of a dual mass flywheel over a single mass one, the main downside is the cost, since the assembly is more complicated. In addition, a dual mass flywheel cannot be resurfaced, and must be replaced entirely. Their hollow make-up renders them prone to heat-related warping. Dual mass flywheels are tuned to match the engine torque curve, vibration characteristics, and vehicle load conditions – failure to keep to these parameters could result in premature damage to the flywheel.

AmTech manufactures both single and dual mass flywheels that fit a wide range of shaft sizes and configurations, and used across industries such as automotive, off-highway, agricultural, warehousing and industrial. Our customers include multinational construction equipment companies, leading ATV manufacturers and global driveline and powertrain manufacturers. Contact us to learn more about our flywheel manufacturing capabilities.

Precision manufacturing of gears, shafts, castings, forgings and other types of OEM products. Contact our sales team to get started today. 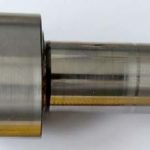